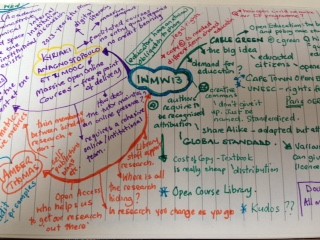 IWMW events tends to attract primarily participants with responsibilities for providing institutional web services. In today’s guest post Lynn Boyle, an academic from the University of Dundee, describes her encounters with the IWMW event as being a bit like Glastonbury! I attended IWMW in 2012 and again in 2013, following a recommendation from Mark Power when we were at the Plymouth e- Learning Conference (PELeCON, April 2012). As IWMW 2012 was being held in Edinburgh (I work at the University of Dundee) it seemed like a good idea.

There were a number of issues of interest to me which were addressed in the IWMW 2012 theme: Embedding Innovation. The overarching consideration was for future users of University materials: what will they would be using beyond social media? The discussion was around the fact that with responsive design Universities seems to always be one step behind and that there is never a ‘one size fits all’ solution. I attended a number of workshops including Identifying and Responding to Emerging Technologies; Creating Large-Scale Responsive Websites; Developing Digital Literacies; Data Visualisation and a few others. I realised that my own teaching in distance learning went beyond pedagogically sound materials and needed to be matched by intuitive design which reflected real world expectation. I needed to be digitally literate (the first time I heard this phrase) and that Twitter, Facebook, WordPress and Google Docs were the way forward. What struck me pretty quickly was that I was among the geekerratti of HE in the UK and was in fact one of the few token academics in attendance. I learned quite a bit but more importantly, I networked with a bunch of corduroy clad folk who since this time, have helped me out with many tech issues, problems and solutions to my work teaching online at a distance. I met too many folk to name but can’t help but mention Amber Thomas, Marieke Guy (illustrated), Ranjit Sidhu (Sid), Steve Boneham, Paddy Callaghan, Martin Hawksey (always good for falling downstairs and keeping a lass company in airports) and the irrepressible Sheila MacNeill, my fellow ‘Glamademic’.

Despite my very poor capacity for alcohol, I survived the social events and never did finish the joke – “Who sang, Tiger Feet’?“. However I came back to the University of Dundee with a slightly enhanced understanding of the issues facing the institution which consequently influenced my practice. I now felt somewhat part of the IWMW family and returned the following year to Bath.  I knew a little more about the conference and looked forward to meeting up with pals such as Doug Belshaw and again made new friends in Zak Mensah, Matt Jukes (illustrated) and Paul Walk and developed a bit of pen envy with Kevin Mears; who was the first person I met who literally drew the conference. I presented this time on my learning lunch concept ‘The Friday Fry Up’ (still going at University of Dundee). However once again it was the networking and socialising that made this a very special place to be. I learned about Open Access from Cable Green who asked for a global standard of educated citizens, where we shared work but attributed it fairly. Open Badges from Doug Belshaw; the possibility of pimping impact through Google Juice from Martin Hawksey and how to amplify my research from Brian Kelly. It was going to be the year of the MOOC according to Kyriaki Anagnostopoulo, the third space, where the cross institutional space would exist. For me the conference allowed me to work and talk to the people who underpin Universities, who facilitate learning and drive change, the enablers and magicians. There were many moments when I was out of my technical depth but over time many of the ideas and discussions have allowed me to integrate ideas into my distance learning programme. I wish I could attend every year, however austerity and cutbacks have meant that travel and conference attendance is challenging. Unless Uncle Brian gives me a free pass invitation and thinks of something an academic could contribute back to this community that’s not going to happen soon, (despite the call from Neil Denny to encourage attending conferences outside of your own sector).  I agree that more academics should attend, as crossing boundaries within institutions as well as across makes a lot of sense to me. I learned a couple more things through IWMW, I realise that I can’t drink whisky even though I’m Scottish (despite this being a Ledaig, thanks Duncan Ireland) but I do know a number of people to call when I can’t get something to click, move, work, stay, or appear. I found a tweet which probably ends this fairly well. IWMW will probably remain my digital truffière, I will return and hopefully still find the geekerratti all in one place: Lynn Boyle is a lecturer at the University of Dundee Lynn is the Lead Officer for the institution for the TESTA (Transforming the Experience of Students through Assessment) project, working with every school and all disciplines. Facilitating learning and teaching online at a distance, Lynn has become interested in all aspects of technology to enhance her teaching. Lynn believes in cross and within in institutional working and has run a staff club The Friday Fry-up for 6 years at the University of Dundee, focusing on teaching.