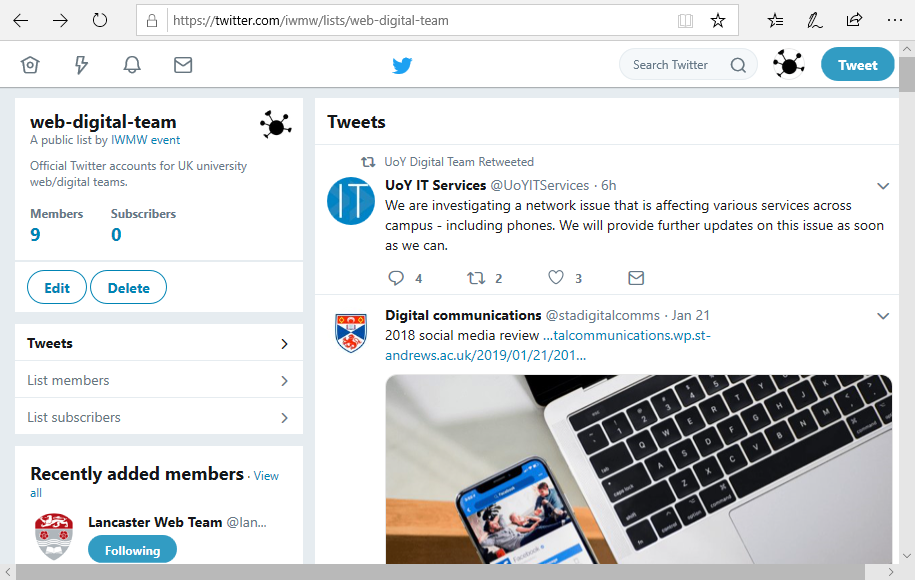 Having an official university web or digital team Twitter account can be a simple way of getting messages out to users, ranging from important announcements to links to reflective summaries of annual activities.

Such information can also be useful to your peers who work in other universities.

In order to facilitate such sharing, the @iwmw Twitter account, which was initially set up to support IWMW events, is now enhancing its remit to facilitate sharing of information which is felt to be of interest to the community, including facilitating access to institutional web and digital team Twitter accounts.

The two most recent tweets illustrate two ways in which Twitter feeds are being used.

The University of York Digital Team (@UoYDigital) retweeted a post from their IT Services department which highlighted a network problem:

We are investigating a network issue that is affecting various services across campus – including phones. We will provide further updates on this issue as soon as we can.

Meanwhile the Digital Communications team at the University of St Andrews (@stadigitalcomms) provided access to their 2018 social media review:

So far we only nine Twitter accounts are included in the web-digital-team list – which includes a number which no longer appear to be in use.