Overview of Speakers at IWMW Events 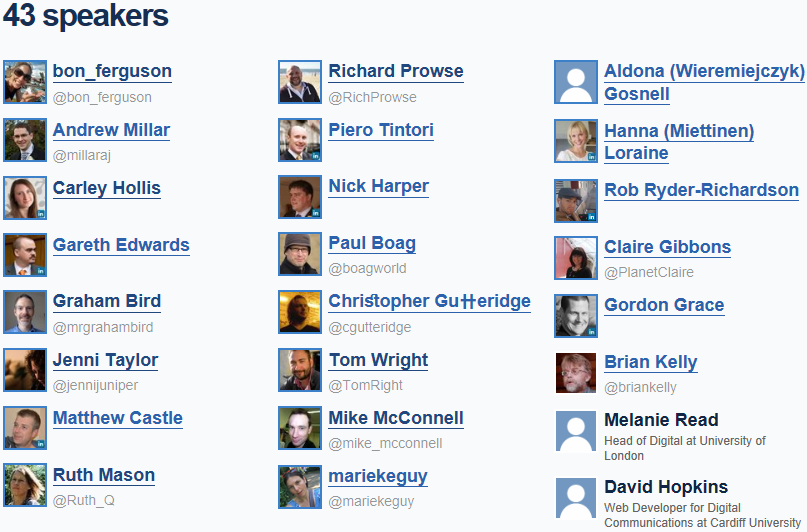 Attracting Speakers from the Community

What’s a good way of sharing experiences and learning from others? An approach taken at IWMW events has been to encourage members of the web management community to share their experiences with others who have responsibilities for managing institutional web services and other digital channels.

That has been a long-standing goal of IWMW events. But do we succeed in that goal? And has the event transitioned successfully from being a Jisc-funded activity organised by UKOLN to its current ownership, being organised by the event founder (Brian Kelly, UK Web Focus) sometimes in conjunction with others?

In order to see how well the event has been doing in attracting speakers we have looked at the speaker directories hosted on Lanyrd for recent IWMW events. A summary is provided in the following table (NOTE links removed due to cessation of Lanyrd service).

It should also be noted that the numbers of speakers at the IWMW 2017 may be subject to change if sessions are cancelled, speakers are ill, etc.

It appears that, after two transition years in 204 and 2015, the IWMW event has now settled down, and this year appears to be attracting the largest number of speakers in over 11 years.

Indeed looking at the number of speakers over the 21 years the event has been running we can clearly see the increase in the number of speakers over the past 3 years, with this year’s event seeing the largest number of speakers ever! It should be noted, however, that ten or so years ago we were exploring alternative approaches to plenary talks and workshop sessions including bar camps, minute madness, pecha kuka and similar sessions. Perhaps for future years we should look at revisiting such approaches – and we should probably use the event’s evaluation form to explore how popular such sessions may be. But for this year’s event participants have an opportunity to hear from large numbers of speakers and facilitators!