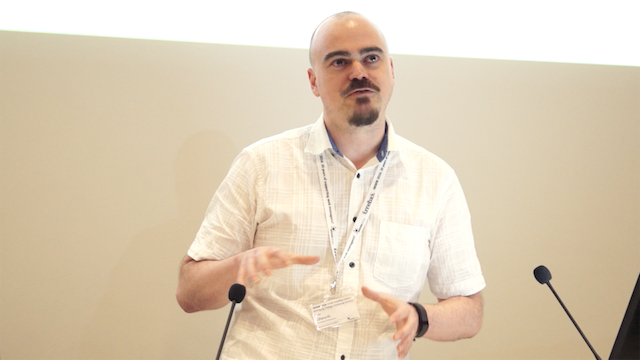 In the second plenary presentation at IWMW16, Gareth Edwards and his team from the University of Greenwich provided a case study of their recent three month site re-skin project. In this post we summarise their experiences and advice to the IWMW audience…

The University of Greenwich went through a period of organisational change in 2015, which included the establishment of a consolidated web team of three staff members. The web team were seen as a support service, and as such were perceived as a barrier to change rather than potential drivers of change. When the Vice-Chancellor announced a new focus on technology and requested a web redesign in just three months, the new team had to prove to the rest of the institution that they could deliver strategic change.

The existing university website had 14,000 pages, including a mixture of internal and external content, managed by 300 users. There were also an unknown number of ‘rogue’ sites to consider. Previous redesigns, including the last in 2010, had not been seen through, so several designs existed across the university’s web real estate. The web team were keen break the ‘re-skinning’ cycle by putting the users first, creating a platform for future development and delivering demonstrable change with the time and resources at their disposal. The team brought in a web agency (Precedent) to help conduct stakeholder workshops and to produce a high level design concept based on an assessment of user needs. They asked Precedent for a 12-month redesign, not a 3-month redesign. This was important, as it allowed them to develop a longer term strategy for the redevelopment of the site, which could be built upon in the future.

The web team then focussed on determining their minimum viable product. Gareth emphasised that it was important to go live with this minimum viable product (MVP) on time in order to demonstrate to the rest of the institution that they could deliver. Their MVP included a mobile-first design across the top two levels of the website, redesigning the home page, redesigning the staff profile pages and redesigning the course pages. They concluded that this could only be achieved in the time frame with some strict rules: there would be no HTML changes, but extensive CSS changes and javascript hacks.

Within the team there were three fixed roles: Design Lead, Development Lead and Implementation Lead. They also had three floating roles: The Communicator, the Support Staffer and the Tester. The project was managed using Kanban boards to prioritise tasks and allow them to track progress. The team separated their concerns into three layers: the Content layer, the Design layer and the Script layer, each of which had a set of rules to guide what they could realistically do and to provide the ground work for future development.

Gareth emphasised that knowing their minimum viable product and having a countdown to launch helped to focus them on the features that were really necessary to successfully launch on time, and which could be added later. They constantly asked themselves: “Will this feature delay us?” “Is it critical?” Some features were de-scoped to help them meet the deadline successfully. As a result, the team were ready to launch with their minimum viable product – fully tested – ahead of the deadline, and were even able to over-deliver in some areas.

Following a successful launch in December 2015, they have been able to implement the things they de-scoped, and make further improvements. This has led to an increased confidence in the web team and in the university’s ability to deliver online. They have even seen a number of ‘rogue’ sites ask to return to the fold.