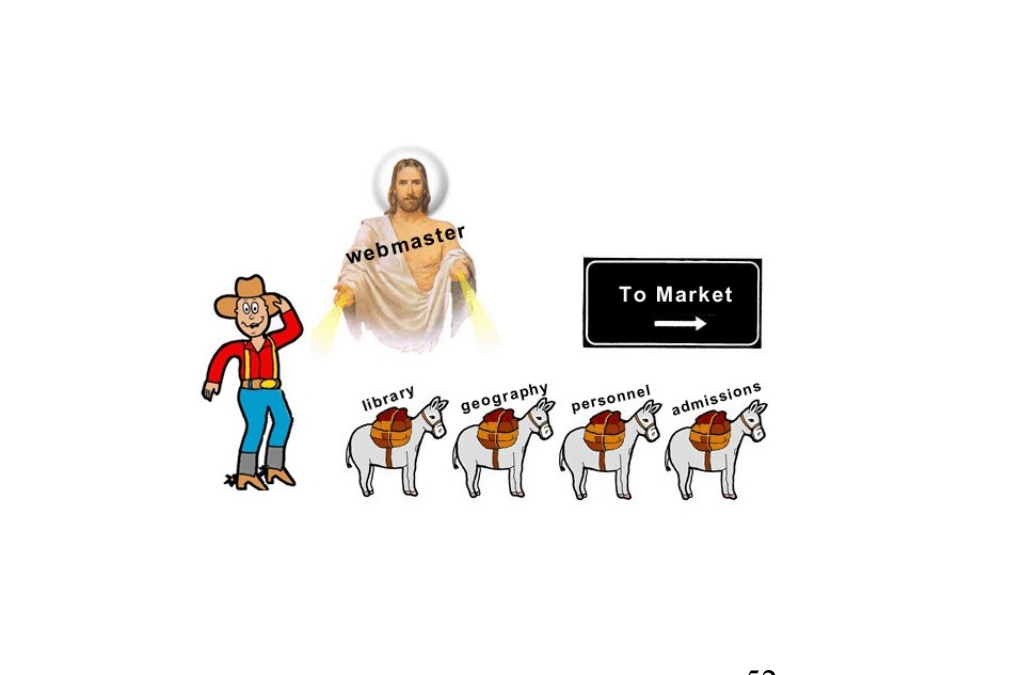 Iain Middleton attended IWMW events when he worked at Robert Gordon University in Aberdeen – and his career path was influenced when he attended a Netskills workshop in 1996, as Iain describes …

What, I wonder – as readers of this august and esteemed blog may wonder – am I doing writing a piece for a conference (sorry: workshop!) relevant to the education/public sector, from which I departed nearly a decade ago?

I blame Brian for many things. Things including career progression, enlightenment and its subsequent dimming through vigorous networking activities that took place the following evening. And the skillz to code HTML 1.0 by hand, in Notepad.

The more things change, the more they stay the same.

It’s the same, but it isn’t the same.

Having crossed over to the private sector (the dark side), in a sales capacity (getting darker) I have missed the thrill of the annual (or as often as I could justify to my employer) get-together of web-minded individuals. So much so that I continued to attend whenever possible, or at least to contrive to have meetings in the same locale which enabled me to join the delegates, presenters and organisers in a conveniently located hostelry, just by pure, total coincidence. Yet, now, in my present capacity, I find that I am once again delivering presentations and workshops on the role of web technology in education. Indeed, these are the very reason that this piece is so late, and Brian is cursing my name and my empty promises to contribute.

I forget the exact dates, and much of what happened on them. It starts in 1996, when zealots from the Church of Netskills cross the border to visit Aberdeen to convert the native tribes to the deity-of-the-month: “The World Wide WEB”. Those present subsequently start wearing dark glasses and long leather coats at all times, and use their new found HTML skillz to break out from the supposed reality imposed upon them. But far, far more important than that, they now have a “home page” on the “internet”, which has their photo and some paragraphs of quirky text listing their passions, obsessions and publications, if any. And pictures of cats. The revolution will not be televised. But there’ll probably be a miniseries dramatisation available on Netflix. How they will make a 1st generation web page look like an exciting breakthrough, 20 years on, is not a question I have to answer.

The next ten years are a blur Shortly after Netskills, Brian initiated what we came to know, and love, as IWMW. IWMW was going to have to be about something more than how to make web pages. And so it was. The after-show alone gave it a reputation as the unmissable annual web-centric event. But it was the unique blend of shared experience and challenging, provoking themes which enabled us to make the case to our department heads to fund the token conference fee, a second class rail ticket and the reasonably priced accommodation at university campuses around the country. Technology after technology were addressed at successive IWMWs. The semantic web; RSS; Twitter. These were all once new, and often frightening, at the very least a challenge to get our heads around. But more than technology, it was the issues that we had to face – accessibility; managing people; controlling the uncontrollable; power and influence; security. Stuff we might not have thought was “for us” at first glance. Stuff we might happily have ignored or avoided, so we could concentrate our creativity on creating more animated GIFs. Stuff we might otherwise not have found out about until it was too late. Stuff that’s just normal these days.

So inspired were we northernmost converts to the Church, that we (myself and the Venerable MRA McConnell) resolved to spread The Word ourselves. But first, we had to write The Word. And before that, we had to decide what The Word was. What are words worth? Also, it should be noted, that we were not really spreading the word by presenting back to the same IWMW audience: we all knew the Word – rather we were asking how this audience could grasp the word and effectively spread it, manage it, control it in their own institutions. Black suits and ties were donned – initially because we thought that’s how grown ups dressed, but latterly because people (who had lost their glasses and/or their minds) mistook us for Will Smith and Tommy Lee Jones: and this emboldened us. (It was not clear which of us was perceived as which). We would challenge the consensus, question whether what we needed was really a Content Management System – or a System for Content Management. Think about it. Debate whether what was needed was centralised control of the institutional web site – or joyful, creative chaos? The workshops were the most creative, rewarding work I’ve ever worked on. Even more so than the work that paid actual money.

The next ten years are a blur

Things have changed. Nothing’s changed. Nobody is employed to hand code HTML in Notepad anymore – the legions of unemployed still litter the streets and I count myself lucky not to be among them (shoulda got into Microsoft FrontPage, suckers). The web is no longer the preserve of The Web Guys in The Web Cupboard: everyone and everything is on it, doing it, without thinking about it as The Web. The web is normal. Normality is the web.

When 12 years of temporary contracts obviously weren’t going to lead to anything more permanent, I made enquiries about this place I’d heard of called the Private Sector, where the riches were said to be limitless and stovepipe hats de rigeur. This seemed very appealing so I made my application and transferred over the Forces of Darkness where I now sell software to persons not so dissimilar to your good selves in MIS departments and Registries at colleges and universities. This market has reflected the pervasiveness and ubiquity of the web, and the solutions they demand are not only web but mobile-enabled: nobody calls it the web, it’s just normal that students conduct their business with each other and everyone and everywhere via their smartphone. If you’re not doing it, they won’t be your students – sorry: customers.

So here I am, up after midnight writing something for IWMW again, after a break of 10 years. This time last week I was also up after midnight, but that was because I am a salesman and I was at a conference where I could not show weakness at the bar in front of customers. I wanted to sleep so badly. But the night before that I was up after midnight writing something about mobile-enabled workflow for students to present the following day at the same conference, because the guy we employ to do these presentations was dragged off to fry bigger fish elsewhere at very short notice. Everything changes, and nothing changes.

And that’s why this piece is so late, Brian. You can blame me, but I will blame The Market. But, ultimately, I blame you, Brian, for starting this whole thing 20 years ago. Iain Middleton worked in Higher Education from 1994 – 2006 after doing a Masters in Information Analysis, turning a thesis on Help Desks and User Support into a full time job. Discovered the WWW in 1995 (like saying Columbus discovered America in 1492…) and in a career of temporary research contracts, quickly made it a job and subsequently created and held the post of  Web Editor at The Robert Gordon University. Moved into Learning Technology at The University of Aberdeen in 2001, designing virtual museums. Went freelance in 2006 and in 2008 moved into software sales for FE and HE. Currently Account Manager, Scotland and Northern Ireland. Lives in Aberdeenshire and spends time outside work being run ragged by 2 small children.

About the images: Iain describes the featured image (at the top of this post) as an ““Infographic” from our IWMW 2002 presentation “Centralisation or Departmental Freedom“, illustrating the webmaster’s role in aligning the desires of central management and university departments, coordinating their planning, resources and enthusiasms. With us in the role of the Messiah.” Iain goes on to add that the second image (embedded in the post) “illustrating management’s efforts to kick departments into working to a single agenda, is funnier because a cowboy is kicking an ass”.