Looking Back at Web Accessibility Sessions 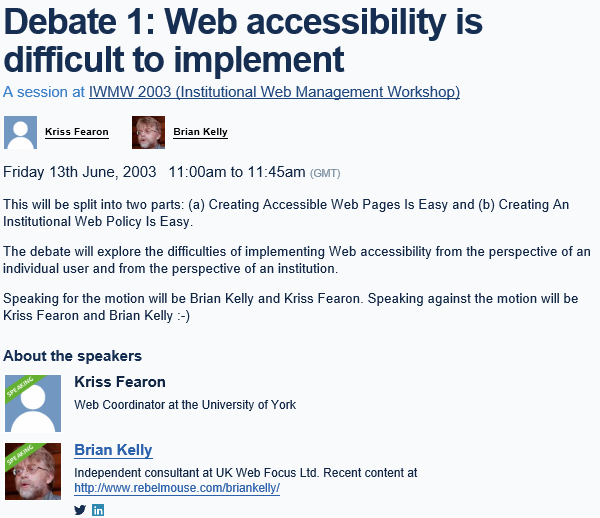 Kriss Fearon attended 14 IWMW events between 1998 and 2011. Over that period she had a particular interest in web accessibility. Looking back Kriss feels that two things remain with her: “The first is the friendships that came out of IWMW … And secondly, I feel even more strongly about the importance of web accessibility: it has grown, rather than diminished“.

Looking Back at Web Accessibility Sessions

I fell into working in HE quite by accident. In 1996, I was a student on the MPhil Publishing Studies at the University of Stirling. One day, my supervisor gave me a newspaper clipping for a job at the University of York. To keep him happy, I completed it, fully expecting never to hear back. I got the job, and the rest is history!

The potential of the internet to improve the lives of people with disabilities had never really occurred to me – at the time I loved print media and electronic publishing was in its infancy. But in 1997 the W3C launched the Web Accessibility Initiative and then the WCAG 1.0 Guidelines two years later. This caused a ripple of interest in the HE web community – then also in its infancy. We were still using HTML 3.2 and many of the techniques for making web pages more accessible were easy to achieve at the time. For someone from a publishing background, who was used to working to style guidelines and having the QA of constant editorial, proofing and print production checks, working to meet common standards was a natural thing to do. The ethical aspect was a bonus, and a much harder sell for some: the UK only launched its own disability legislation, the Special Educational Needs and Disabilities Act, in 2001.

Although I like the idea that people will naturally want their work to be accessible, and the highest quality it can be in other ways too, the reality of daily life means that some people didn’t have the time, the skill or the awareness of how to achieve web accessibility, to be able to do the work. We shouldn’t need legislation to tell us web content should be accessible as widely as possible, but in practice the time isn’t allocated and the training doesn’t happen unless this work is prioritised – and when it’s the law, that’s a pretty strong incentive.

As the new law was coming into force, HEs took steps towards compliance. While planning and implementing these changes at York, I was lucky enough to have access to support and advice (free – for the price of a pint!) from colleagues all over the country through the IWMW mailing lists and annual conference. In 2003 I spoke against Brian (who enjoyed his role as Devil’s advocate) arguing that web accessibility is achievable and even with imperfect amounts of time and money, it is still worth doing.

In 2012 I decided my career path led elsewhere and left York, first to do an MA in research methods at Leeds, and then to work as a UX and Accessibility practitioner at a firm which specialised in observational user testing with eyetracking software. This was a fascinating role which also gave me the opportunity to manage accessibility testing projects with users with disabilities. There is nothing like watching a real person struggle with something you are working on to make you aware that the things that are obvious or easy to one person are difficult or a barrier to another.

Like ex-colleagues from HE such as Keith Doyle, Patrick Lauke and David Sloan, I went into the commercial world expecting it to be very different, and discovered that some of the same problems exist. Accessibility can be a very hard sell, much more complex to achieve with current technology, and sometimes it is easier for firms to take a risk and wait until someone complains and deal with problems at the time, than to anticipate needs and work with them. We still don’t have a single piece of case law that will help us understand how disability legislation (now covered by the Equality Act 2010) will actually be implemented. The people who came to my firm asking for accessibility testing were already sold on the idea – it’s the people who don’t think it is a priority who we still need to persuade.

The days of vehemently debating the use of tables for layout or whether you should use alt text with a single-pixel spacer gif have long gone. But two things remain with me. The first is the friendships that came out of IWMW, often begun in the bar while arguing about some technical point or other. The support and informed advice of my colleagues both at York and across HE meant a lot to me as the sole member of York’s web team for the first six years of my job there. I am glad I was able to participate and contribute at such an important time for HE web teams.

And secondly, I feel even more strongly about the importance of web accessibility: it has grown, rather than diminished. For cost and efficiency reasons, so much of our life takes place online now. If we do not ensure universal access, we put barriers in the way of a whole group of citizens, students and staff who are already marginalised. I think we can do better than that. Kriss Fearon became Web Coordinator at the University of York 20 years ago this month. Her first task was to put the postgraduate prospectus online. She spent the next 16 years providing guidance to purchasing teams on the usability and accessibility of external software, and to web authors on web accessibility and accessibility testing. She was the secretary of York’s e-Accessibility Forum, involved in both practical and policy decisions around implementing accessibility standards. She left in 2012 to return to full time study, and is now a PhD student at De Montfort University.