“For once I want to be the car crash!” 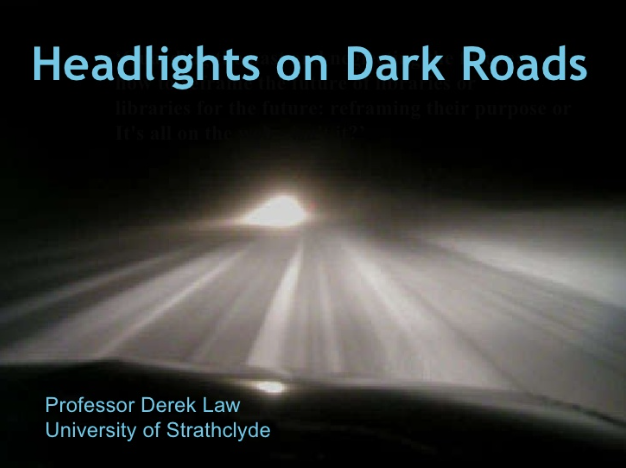 Professor Derek Law was Librarian at King’s College London from 1985-1995, Professor at the University of Strathclyde from 1995-2008, a board member of the JISC eLib programme from 1993-2001 and a JISC committee member between 1982-2012. Derek, who is now an independent consultant and emeritus professor at the University of Strathclyde, has spoken at two IWMW events, in 2002 and 2009. In this guest post Derek revisits his plenary talk from IWMW 2009.

“For once I want to be the car crash!”

As I write this I’m sitting on a train to London for yet another meeting about websites. Amazing how many small learned societies still have problems with this. And it’s also one of those days of spooky coincidences. In a nerdy sort of way, I keep old conference bags at the back of a cupboard in the garage. I needed one for carrying papers to today’s meeting and of course the one that come out was an old IWMW bag. In best and greenest fashion it is made of hemp and has that slightly weird spider logo on the front. It comes from the IWMW 2009 event held in meeting where I gave a talk called “Headlights on Dark Roads” after the then current hit from Snow Patrol (remember them?). The reason for choosing that the title came from the first verse of the song, which has always summed up my approach to things:

In other words I want to be part of the action and not an observer on the sidelines.

As I look back after seven years, many of the specific threats that I cited have disappeared or at least remain peripheral.

One particular concern was Google and Microsoft’s attempts to take over the scholarly lifecycle by providing free software. Happily this threat has stultified if not disappeared. And I listed a set of promising and exciting new tools and social communities.

Not many people will remain familiar with those bold new initiatives of 2009. Most are still here, but it would be hard to say they have flourished spectacularly. Some such as Nature Precedings have disappeared while others such as Sermo have changed from exchanging medical information through a social network to (quite properly) complaining bitterly about contracts for junior doctors. I remain rather more confident that the challenges I cited in my talk remain major issues:

I perhaps overestimated the importance of trust metrics. I remain convinced that they will be seen as important but for the moment must content myself with the role of prophet in the wilderness.

And I certainly underestimated the importance of preservation and curation although managing institutional born digital assets might be said to cover this. One small sad example demonstrates the need. As I began writing this I did a search on the IWMW 2009 event in Colchester. After a degree of meandering I was pointed to a site which claimed to link to Twitter comments on the site:

This leads to an unusable site which has become Digital Matchbox. Even more sadly I was able to move on to a site that has now closed – JISC PoWR. It was a Bath based project for the “Preservation of Web Resources: a JISC-funded project [Archived Blog]”

So I looked for Colchester and the site says:

“As an example you can search for the tweets related to:

Sadly, all the links are broken.

So the challenge for Brian and his remarkable array of colleagues is to keep the faith, keep proselytising and make sure that the links to this 20th birthday set of blog posts blog posts still work when the 25th birthday comes along!

Anyway, at least the paper did contain one of the best policy jokes I know:

Note the slides used in the talk are available on Slideshare and embedded below:

Headlights on Dark Roads from IWMW Derek Law has worked in several British universities and has published and spoken at conferences extensively. He is a regular project evaluator for the EU and has undertaken almost fifty institutional reviews. Much of his career was spent working with JISC (Joint Information Systems Committee) latterly as chair of the JISC Advance Board. Most of his work has been to do with the development of networked resources in higher education and with the creation of national information policy. Recently he has worked on the future of academic information services. This has been combined with an active professional life in professional organisations related to librarianship and computing. Most recently he has been a reviewer for the Hellenic Quality Assurance Agency and is a regular reviewer of EU Projects.