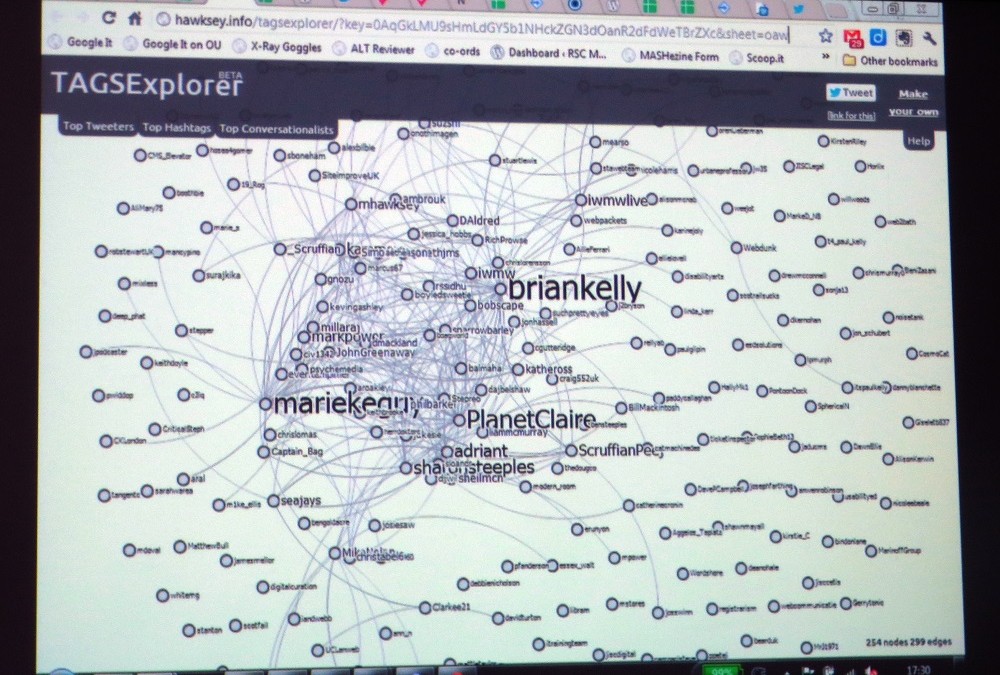 Sharon Steeples has attended no fewer than 12 IWMW events since 2002. She concludes that over twenty years we have fostered a community of like-minded folks, faced the same issues, the same changing tech, the same battles and the same ever-changing Internet landscape.

Having just hung up on (yet another) phone call from a scam call centre claiming to be from “Microsoft” and who (for the bargain fee of only £149) would supply one download to “fix all of the viruses on my PC, iPhone, Xbox, and RedHat Linux box” …. yes really!…. It set me to pondering …

Things have changed. They really have.

Today the Internet is a far sadder, and far madder, place to work, rest and play.

It’s not nice out there anymore. Phishing. Scams. E-mail harvesting bots. Malware. DoS Attacks. Massive data thefts. Hacking. Credit card fraud … The list goes on. And we all carry the Internet in our pockets with 24/7, 365 on-demand access expected and indulged. Our lives aren’t ‘real’ unless they are being live-streamed/tweeted/Instragrammed/checked-in on Four-Square/tagged on FaceBook.

In 2001, when I started working with ‘The Web’, it was just another medium, like print, or video, or audio. An optional method … for reaching some of your users … if you felt that might be appropriate…if they even had an Internet connection available … (many didn’t so the University offered a dial-up service back then) …. and if you had access to someone with web skills to make web pages for you.

Nowadays, we live or die by the web.

Cast your mind back to the last website you visited that failed you in some way. How do you feel about that provider now? Not amicably I’m guessing? Did you nuke that browser tab and go elsewhere? Internet death is swiftly executed by users.

In the “good ol’ days”, (*cough* the early noughties), things were simpler. The posts of web author, web content creator, web editor, web designer, and web developer were pretty much all…well just one job. My job, back then. Part of a team of four at the University of Essex. We were multi-skilled code-monkeys. Creating nearly all of the University’s online presence for everything. Living in the worlds of HMTL, PhotoShop, JavaScript, FrontPage, and a smattering of (classic) ASP. Our coding struggles were very real. Frames were allowed, and don’t get me started on the “joys” of FrontPage hover buttons. Netscape Navigator 4.7 was our baseline browser, and IE 5 was a pig but on every PC in the Uni. We all just wished that the world would start using Opera – the new browser on the block (still in beta).

I’d barely been working with the web team for 6 weeks when the planes hit the Twin Towers. With 15 or so of our section crowded around the only PC still able to reach the besieged BBC News website we watched the tragedy unfold in words and pictures. That was the first time in my life that the importance of the Internet’s real-time connection to the wider world was thrown into stark relief.

I was now an addict. To be without Internet caused pain (well … inconvenience at least).

The first IWMW conference I attended was in Strathclyde in 2002. I remember impatiently queuing at the registration desk for a username and password so I could check my work emails in one of the open-access labs (with computer monitors the size of a refrigerator). Jump forward to IWMW 2005, and I’d invested in 17 inch “portable” laptop (weighing as much as toddler, and about as easy to lug around), but I was one of the lucky ones – although the game of ‘hunt the plug socket’ was afoot and those who lost, watched miserably as their 4 hour battery lives disappeared into a black screen of death. That year I was supremely grateful to have my laptop, because that was the year of the 7/7 bombings in London, and it was the second time that the Internet’s real-time connection really mattered to me.

And latterly, of course, the last conference I attended (IWMW 2013, Bath), I slipped my iPad into my handbag.

Sadly, I can’t attend IWMW 2016 because I’ve moved roles (I now look after the SharePoint Team, and work in Corporate Information Systems), but in my fantasy suitcase: no need for an extra device. Just my iPhone. That ubiquitous device that I cling to everywhere. My lifeline. My social life. My work. My world. My Internet.

<rant>Wise up folks! If your website doesn’t work on portable devices you are dead in the water. </rant over>*

And if the devices we use haven’t changed enough for you to reflect on, (you #N00B!), then maybe some of these buzz words will give you clues to the key issues that troubled us in previous IWMW events (some of which are now but a distant memory … maybe find an older person and ask them to elaborate?)

Through all of the above, IWMW has been there. Twenty years, fostering a community of like-minded folks, facing the same issues, the same changing tech, the same battles, and the same ever-changing Internet landscape.

With that in mind, I will leave you with the words of Fat Boy Slim, who I think sums it up perfectly:

# We’ve come a long, long way together, # Through the hard times and the good. # I have to celebrate you baby, # I have to praise you like I should.

* Yes, seriously, don’t even get me started on this. It was the subject of my session at IWMW 2009 (Essex) The Mobile Web: keep up if you can!, and subsequent session with Richard Prowse at IWMW 2011 (Reading) Accessibility, Inclusiveness and the Mobile Web . And it really isn’t true that there are some things that a user won’t bother to attempt on a mobile phone. USERS WILL USE WHAT IS IN THEIR HAND! To apply for a course? Yup! To pay fees? Yes! To upload coursework? Of course! What part of this are you finding hard to grasp???

** And if anyone has managed to come up with a definitive answer to that, even now, I’ll eat my keyboard! Sharon Steeples started work in the Web and Learning Technology office at the University of Essex in 2001. Working as part of a team, her responsibilities included maintenance and development of the University corporate pages, Web site design, Web support and Web related training for staff.

Since 2008, Sharon has worked for the “Dark Side”, (a.k.a. Corporate Information Systems) as a Web Analyst Programmer, and now SharePoint Team Leader. Her special interests are the Mobile Web, ASP.Net, and CSS. Sharon is addicted to gadgets and kittens, and was a professional London theatre director before settling down to her life in Essex.