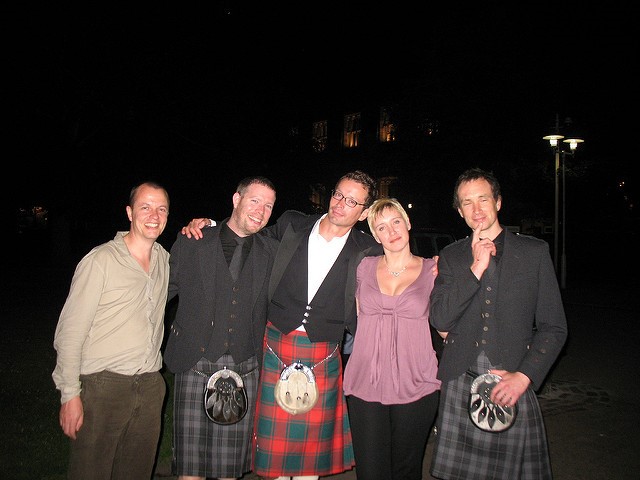 Debbie Brooke attended her first IWMW event in 2002 and attended every event until IWMW 2011, when a change of responsibilities in her role at the University of Essex meant she moved away from web work. Over the ten IWMW events Debbie had a lot of fun and developed strong connections across the UK’s web management community as she describes in this guest post.

I didn’t quite know what to expect from my first IWMW. I’m not a techie in the slightest, and although working as a web developer at the time, I was really worried I would be out of my depth surrounded by people who were much cleverer and generally better at being super than me …

What I definitely didn’t expect was to be flung around the room like a maniac on the first night, within minutes of walking through the door, and then have men brandishing swords appear. Booze and a Ceilidh, hang on a minute, I think I’m going to like this!

That was Strathclyde in 2002. My favourite part was that it totally dismissed all my ideas that everyone working in the web field was a techie or a nerdy coder, or that I wouldn’t fit in.

Over the years, I attended ten IWMW conferences, mainly as a participant, although occasionally as a facilitator and host too. Not blue, a bit random and not too Scottish was my first session.  I remember being terrified before that workshop. OK, I had a fab title (in at number four on Marieke’s blog of her top ten session titles), a carrier bag full of Haribo and a complex blivet, but would that be enough? Fortunately it all went really well (of course it did, we had Haribo) and I went on to run a couple more sessions: So, what would you do with 45 sixteen year olds? and Hands up if you haven’t done yours yet…

Although the sessions are important, useful and generally really well done, for me it’s the mix of people and the networking that really make IWMW work. It’s become an invaluable resource; a community of likeminded people ready and willing to help with any issue you may have, who meet up once a year and are always just at the end of an email. It also generated some wonderful lasting friendships outside the conference. Great times were had staying on after the conference with lovely people to see more of the area where the conference had been held that year. Beautiful gardens and scenic walks in Aberdeen, concerts in Sheffield and erm Clacton after the IWMW 2009 in Essex were real high points.

My favourite moments will always be the silly, random (yeah ok, occasionally drunk) moments. There have been many and it’s hard to pick; actually it’s hard to remember most (I blame Sid).

Getting lost in the building that hosted the entertaining (for the wrong reasons) comedy night at IWMW 2003 in Kent was hilarious. Several groups of random people were running Scooby-Doo style along corridors and stairs, always ending up at the court yard with no exit; it was like something straight out of the cartoon. The following comedy at speed walk straight in to the full height glass doors at our accommodation (which were closed as it was so late) by Keith Brooke was also a moment to remember. Not sure I’ve ever seen anyone hit the floor so fast.

Sid, literally drinking the bar dry at IWMW 2005 in Manchester. For some reason the memory of him lying on the bar sucking on the beer taps just won’t go.

Not necessarily a high point, but mentioning the night I was marinated in Ranjit Sidhu (Sid) sponsored red wine at the IWMW 2006 in Bath by Michael Wilcox, when he drunkenly refused to stop banging on the wobbly plastic table holding our drinks and both our full glasses ended up in my lap, ruining an entire outfit and my gorgeous new baby blue suede bag (it got binned) gives me the opportunity to renew his guilt, and remind him he still owes me a bag!!!

Brian’s brilliant and unrepeatable response in reference to some random people discussing my feet. Ooh and lipstick Brian, can’t remember which year that was (I bet there is a photo somewhere though) … actually, just Brian in general.

The Ceilidh #2 at IWMW 2008 in Aberdeen: the beautiful Scottish (and Irish) boys in their kilts showing us ridiculously unfit folk how it should be done [see featured image at the top of this blog post].

Ending up with sunburn…in Aberdeen!!

Mike Whyment’s face when the magician pulled the card out of Mike’s pocket.

Also at Aberdeen, being part of a shameless group who won the Innovation Competition with our feedback of the conference and Brian’s many, many acronyms, in the form of song, sung to the tune of ‘The Lion Sleeps Tonight’ was particularly special. Made even better that it was whisky fuelled (thank you JISC, and erm, sorry Rob Bristow for waking you up at one in the morning to steal request your whisky) and written in the stairwell in the early hours of the previous night. Our director was really impressed when we came home and told him we’d won the competition, slightly less so when we told him how.

Hosting the IWMW 2009 at Essex was fun and scary and gave us just a small hint at what it takes to put on such a show. The pre-meetings to assess the venue and local services (yes I do mean Real Ale Pubs for Brian), are really interesting. Years of experience from the organisers meant they were ready with lots of probing questions on potential pit falls and hazards. Unfortunately this insight didn’t stop us getting locked in the car park after dinner on our recce of town. A warning to stay away from the Karaoke would have been handy too.

Most useful insight I got from the Essex conference is don’t tell anyone you have booked a large table for dinner on the ‘night out in town’. You might just get to the restaurant and find they have stolen your table and filled it with their crew…You know who you are!!! I still think you owe me dinner for that! IWMW 2011 in Reading was my last. It wasn’t because of the flaming sambucca’s that led to this photo being taken [see image], although that might do it for most people. My job changed shortly after this and having project managed the University website redesign and build (twice) I moved on to become a full time Project Manager. They just don’t do conferences like the web people do though… All I can say is thank goodness for Facebook. Although we all laughed at it (and at ourselves as we created little pets and tried to keep them alive on cake) it means I can keep in touch with the antics of the IWMW friends, both near and far, that I have made along the way. For me the friends I have made is definitely the best part of being involved with something as wonderful as IWMW for so many years.

Oh, speaking of Facebook … in my bio for my very first session I said I would rather be making cakes … what a difference 10 years makes: https://www.facebook.com/brookesbakes/.