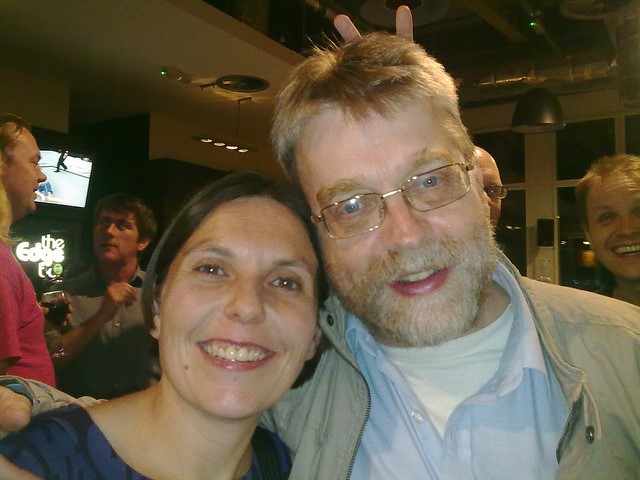 In her third guest post Marieke Guy, a former IWMW co-chair, shares her favourite photographs of the eleven IWMW events she has attended.

It’s a little cheesy but I like this photo of Brian and I. Brian has always been the main man behind IWMW but I was very proud to be his side-kick for many years. Photo by UKOLN, 2010. Available from Flickr under a CC BY-NC-SA licence.

I remember this incident from IWMW 2012 well. Mark Power and Tony Hirst were arguing over the difference between an infographic and a visualization. It didn’t really come to blows but there was a lot of passion involved! Photo by mariekeguy Available from Flickr under a CC BY-NC-ND licence.

This is probably the first photo I have of an IWMW event. It was taken in Belfast in 2001 and shows (from left to right) Grace de la Flor  (ILRT), Paul Milne (EDINA), Gareth McAleese (University of Ulster), Joy Palmer (UKOLN), unknown person, myself (UKOLN) and a second unknown person. I like this photo because it shows some of the worker bees at the event. From left to right: Adrian Stevenson, then UKOLN, now Jisc, Kirsty Pitkin who has helped out as event amplifier many times, Michelle Smith and Natasha Bishop, both UKOLN event organisers and Phil Wilson from University of Bath. We are outside Kelham Island industrial Museum, Sheffield at IWMW 2010. Photo by UKOLN, 2010. Available from Flickr under a CC BY.NC-SA licence.

5 Getting Ready to Introduce the Vice Chancellor

2006 was my first year as co-chair. This photo shows Liz Lyon, director of UKOLN, Glynis Breakwell, Vice-Chancellor at the University of Bath and myself just before we opened the event. I think I was a nervous wreck but somehow held it together. Photo by UKOLN, 2006. Available from Flickr under a CC BY.NC-SA licence.

6 Not Your Normal Sponsor!

A lovely photo of Keith Brooke and Ranjit Sidhu (Sid) taken in 2011. Sid’s company has sponsored the event many times, but his sponsorship isn’t like your usual corporate backing. Sid just attends sessions, buys drinks, shares ideas and generally gets in there. Terminalfour are another group of great sponsors who understand what makes web managers tick. Photo by Guy Beresford. Available from Flickr under a CC BY licence.

The ceilidh in Aberdeen was really good fun despite the fact Mike McConnell ditched me because of my poor dancing. L to R: Keith Brooke, Mike Whyment, Iain Middleton, Debbie Brooke and Mike McConnell. Photo by UKOLN, Aberdeen 2008. Available from Flickr under a CC BY-NC-SA licence.

This photo shows us streaming in Bath in 2013. We’ve always done our best to make sure that we capture as much of the event as possible for those who are unable to attend. This photo was taken by Sharon Steeples who always does an amazing job of taking lots of photos at the event – not only that but they are pretty good too! Photo by Sharon Steeples 2013. Available from Flickr under a CC  BY-NC-SA licence

Another great photo from Sharon Steeples. This one has Mike Nolan chairing a discussion on Web 2.0 us where it’s at. People look like they are voting in some way, or there’s a lot of people keen to ask questions. Either way its showing what an interactive and engaging event IWMW is – even in the lecture theatre sessions. Photo by UKOLN 2006. Available from Flickr under a CC  BY-NC-SA licence.

Special mention goes to two more images – not photos but they still sum it all up for me.

Kevin Mears from the University of South Wales has been visually representing talks and events at IWMW – way before it was trendy to do it. His pictures always nail the content, so in this one I love the Facebook bomb in the sea.