IWMW: On the Web, the World Wide Web (GP) 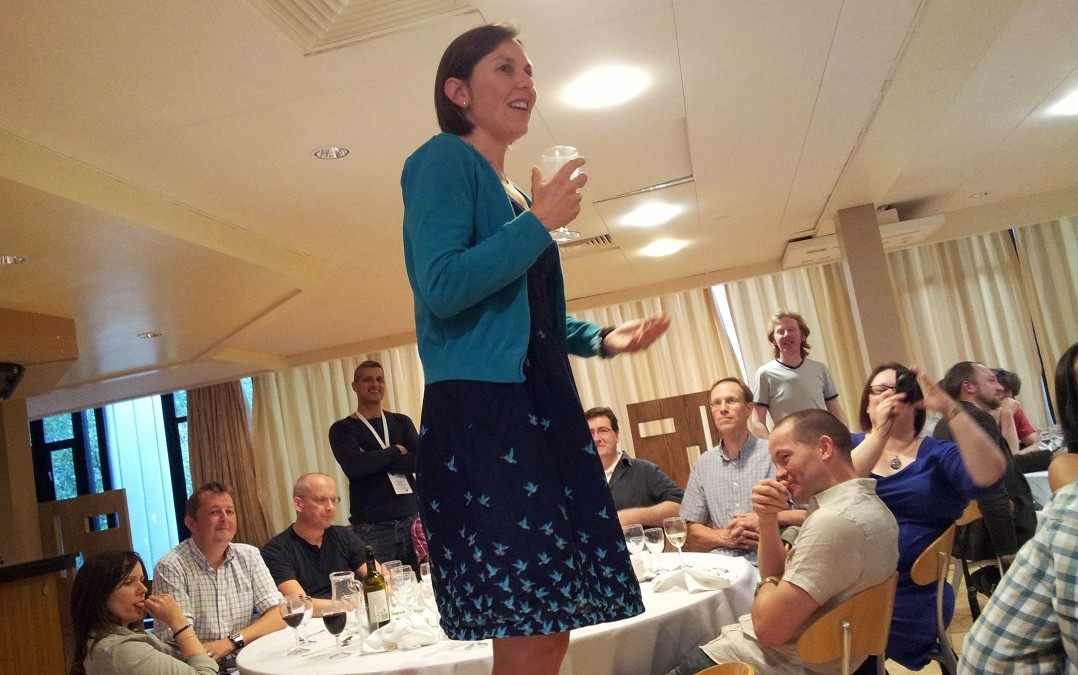 If you have attended an IWMW event between 2000 and 2013 you have probably met Marieke Guy. Marieke has facilitated sessions at many of the IWMW events and was event co-chair from 2006-2011. In this guest post Marieke looks back at the 11 events she has attended.

IWMW: On the Web, the World Wide Web Of the 19 IWMW events that have taken place I’ve managed to attend 11. It’s not a bad number really. If I hadn’t had each of my three children so close to the month of July I would have made it to another three! My first IWMW was at the University of Bath in 2000, it was only a couple of months after I’d started at UKOLN and it was all pretty new to me. I remember dipping in to see sessions between normal working stints. It wasn’t sufficient to get a feel for the community but it did wet my appetite enough to get me keen to contribute more the following year.

IWMW 2001: For the ‘Organising Chaos’ themed IWMW held at Queen’s College Belfast in 2001 Brian suggested I run a session on ‘Benchmarking websites’. Being a facilitator got me an early ticket over to Belfast to join Ricky Rankin and his team for a tour of the troubles. I still have a clear memory of meeting Brian and Chris Gutteridge in a down-town pub the night before it all began and thinking “What have I let myself in for? These guys are serious geeks!” It was a relatively small affair compared to some of the later workshops but it was already clear that a community was forming with Brian as their leader (or should I say messiah…now where have I heard that one before?).

IWMW 2003: After skipping a year to have the first of my children I was back at the University of Kent in 2003 running a workshop with Anne McCombe (then from MIMAS) on ‘Catching Mistakes: Using QA to Address Problems on your Web Site‘. There always seems to be an element of competition over session titles at IWMW – who can come up with the cleverest pun, the best use of a song title or phrase. Sounds like a good idea for a blog post – watch this space! I think Kent was the first year that I felt like I knew a few people, some familiar faces, some familiar names. Some of the speakers I still keep in touch with and occasionally bump in to. Hey, half my Facebook friends are web managers! Community has always been one of the biggest part of IWMW…along with innovation and experimentation.

IWMW 2005: The IWMW 2005 event at the University of Manchester themed ‘Whose Web Is It Anyway?’ is one that sticks in people’s memories for the wrong reasons. The 7 July London bombings happened on second day. A good WiFi connection, the BBC news site and the recent development of social media services like Facebook meant that attendees not only knew about the events early on but could also hear from colleagues in the area as the situation played out. It really drove home how technology was changing the way communication worked. It was in Manchester that my colleague, Emma Tonkin, and I first presented on the concept of folksonomies in a session called ‘Folksonomies: Metadata or Mess?‘. We later authored a paper on the topic for DLib magazine. It continues to be my most cited paper and has appeared on many library reading lists.

The Brianbot – so much easier to handle online!

IWMW 2006: I can’t remember the exact timings of events but either during or not long after IWMW 2006 Brian admitted that he needed some help with organising. The number of attendees was on the up and there were more and more sessions to co-ordinate. I agreed that I would help co-chair and we decided upon a natural division of labour: Brian would lead on innovation and fronting the event and I would concentrate on the back-room organisation. So in 2006 IWMW returned to Bath for ‘Quality Matters‘ and I started off events by introducing the Bath Vice Chancellor, Professor Glynis Breakwell, to the main stage. Although I was busy co-ordinating the programme, speaker arrangements, the website and so on I still managed to squeeze in a sideline activity. After discussions with David Burden from DadenLimited we got our hands on the software for a chatbot (a robot which attempts to mimic the art of human conversation) and so Brianbot was born! 2006 also marked the 10th anniversary of IWMW and we celebrated by surprising Brian with some UK Web Focus beer and a special geek t-shirt.

IWMW 2007: While I led on the organisation of the University of York IWMW in 2007 I failed to make the event as my son was born 9 days before it took place. Brian kindly mentioned this in his opening slides and made good use of some new IWMW graphics (see the spidery logo). It was also the first year that we had sponsors and an exhibition.

IWMW 2008: I was back in the co-chair seat for the University of Aberdeen event (‘The Great Debate‘) in 2008. We were treated to really sunny weather, a fantastic venue and a great ceilidh for the evening entertainment. Also a huge amount of support from the local hosts: Mike McConnell and the Aberdeen web services team. We really ramped up the technical experimentation for the event and introduced a social network using Ning, successfully ran live streaming through the Aberdeen live streaming service and introduced an innovation competition showing lightweight examples of innovative uses of Web technologies. Aberdeen was where we had our first BarCamp which  allowed attendees to be more involved in crowd-sourcing the programme. I co-facilitated a workshop on Embracing Web 2.0 Technologies to Grease the Wheels of Team Cohesion with Andy Ramsden and a workshop on Approaches To Web Resource Preservation with Brian. There’s a short video of the event on YouTube made with Animoto. You can also watch the IWMW song composed by Claire Gibbons and other IWMW stalwarts! (Anyone who knows Brian will understand that the call for a ‘Brian filter’ was a genuine request!) IWMW 2009: In 2009 IWMW was held in Essex and once again supported by a great web team: Debbie Nicholson and Keith Brooke (now a married couple!) There were some great nights drinking by the river in Withenhoe and some fantastic sessions but the biggest memory I have is of Twitter. Twitter was everywhere: as a back channel, on the walls, in the sessions and supporting remote attendees. I wrote about it in a report for my old blog – Tweetastic at IWMW2009  – along with posts about the event amplification and the video streaming. A first for me but due to being so heavily involved in the organisation I didn’t end up facilitating any workshops, however I did chair the opening afternoon (as you can see from the video recording).

IWMW 2010: 2010 brought us to Sheffield for a pretty rainy IWMW coincidentally themed ‘The Web in Turbulent Times’. How to survive the recession, restructuring and reduced budget were very much the order of the day. Behind the scenes we worked on making sure that those who were unable to attend could still be involved remotely and made sure that future events would be fit for purpose. I also worked on archiving the Tweets from the event – it was becoming increasingly important that we kept a good record of the social media used.

IWMW 2011: IWMW 2011 was in Reading and with a theme of ‘Responding to Change’. Talks by Amber Thomas and Ranjit Sidu explored how web managers could start thinking of their work as a marketing tool. Still thinking about cut backs I facilitated a session with Brian on the economical way to amplify your event. One major change was that we cut the usual 3 days down to 2 days, dropping the usual local excursion and just having a conference dinner. It definitely felt leaner, I don’t think people were that keen though hence the move back to 3 days the following year.

IWMW 2012: By IWMW 2012 I’d been moved on to other work at UKOLN, primarily supporting the Digital Curation Centre with research data management, which meant I had to step down as co-chair. However I did manage to attend the Edinburgh event and began to look at everything with a much more data-focused head. I ran a parallel session entitled ‘Big and Small web data‘ which actually tied in nicely with the theme of ‘Embedding innovation’ and ideas related to content being data.   The drinks reception that year was at Our Dynamic Earth and was probably one of my favourites. All the IWMW event organisation (booking venues, logistics, accommodation, costings, etc.) has been carried out by many great UKOLN staff over the years including Natasha Bishop, Michelle Smith, Sara Hassen and Joy Palmer. They always did an amazing job.

IWMW 2013: IWMW 2013 was the last in the workshop series that I attended. It was held in Bath just around the time the majority of UKOLN staff were about to be made redundant. I had already started working for part-time for Open Knowledge but still had a month left at UKOLN. I ran a session with Tony Hirst (who later on ended up being my colleague at Open Knowledge) looking at open and linked data in education. While UKOLN’s future was bleak IWMW’s future at this point was still uncertain and it was a bit of an emotional roller coaster for those involved, especially those who have attended quite a few of the series. You can get a good idea of how I was feeling from this blog post I wrote entitled The Delicious Discomfort of IWMW13 [and from the photograph of Marieke getting emotional and giving a speech in the Claverton Rooms at the beginning of this post – editor].

Since leaving UKOLN I have been unable to get to IWMW but I have officially been given the go ahead this year and hope to present on some of the synergies with my new work as a data analyst at the Quality Assurance Agency for Higher Education. IWMW has always been my favourite event in the conference calendar. There is always so much to learn and great sessions to attend, but its biggest pull has always been the web management community. Image credits: Marieke opening the IWMW 2008 event by Pip, available on Flickr. Marieke getting emotional and giving a speech in the Claverton Rooms at the University of Bath (image at start of post) by Claire Gibbons. Images used under a CC-BY licence.