Beyond Your VLE: Strategic Challenges 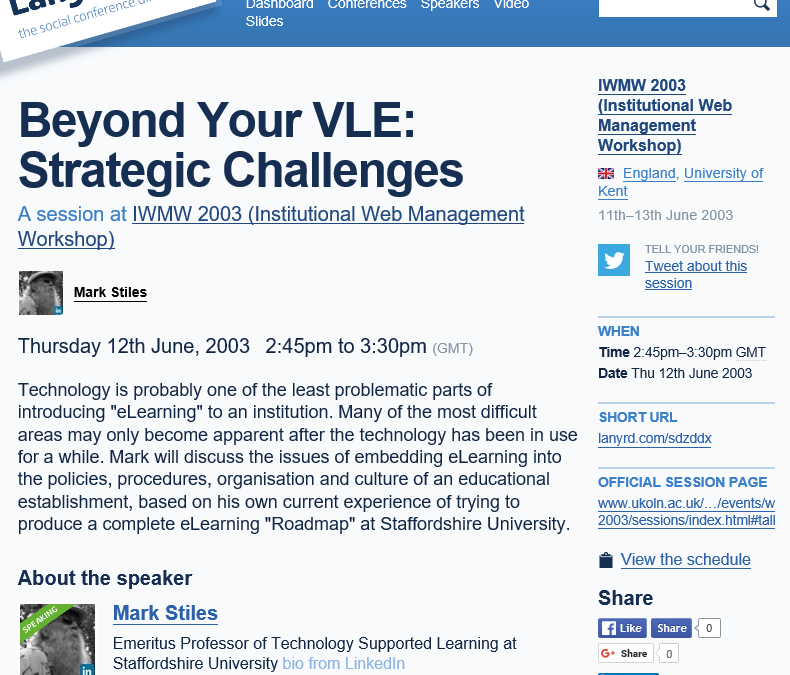 In 2003 Professor Mark Stiles gave a talk on “Beyond Your VLE: Strategic Challenges“. In this guest post he looks back at the talk and concludes that, 13 years later, interoperability is still a major issue in technology-enhance learning.

Beyond Your VLE: Strategic Challenges

Back in 2003, I gave a plenary talk at IWMW 2003 entitled “Beyond Your VLE: Strategic Challenges”.

At the time this was described as:

“Technology is probably one of the least problematic parts of introducing “eLearning” to an institution. Many of the most difficult areas may only become apparent after the technology has been in use for a while. Mark will discuss the issues of embedding eLearning into the policies, procedures, organisation and culture of an educational establishment, based on his own current experience of trying to produce a complete eLearning “Roadmap” at Staffordshire University.”

A key point of my talk was that an MLE (I shall refer to this as TEL- “Technology Enhanced Learning” – from now on as the term MLE is not used current practice, but did cover the concept of “all the stuff used for TEL joined together) could only be considered embedded when:

The use of MLEs can be considered to be fully embedded into an institution when all of the policies, procedures, roles and responsibilities that pertain to the use of an MLE are fully integrated – not just with each other but with those which apply to the institution in its normal practice. I described the – very good at the time – progress my team had made at Staffordshire, but noted the following “BUTs”:

Little did I know …

The small list of bullet points above came to define my professorial focus (and I was always interested in pedagogy and how to change that – ah well…).  I became very interested in the fact that educational organisations, whilst they frequently produced innovation in the uses of technology in teaching and learning, struggled to sustain innovations and that the organisational aspects of universities and colleges seem almost to guarantee an inevitable drift back towards the status quo.

The uses of TEL have indeed grown considerably over the years, with systems not only providing support and enhancements for teaching and learning, but also the management of learning, submission, assessment and feedback and the capture of information at the institutional, course and learner level (analytics) to inform all of this.  Nevertheless it is clear that, in most institutions, all of these aspect are not well joined together and do not (largely) effectively pass information between the various systems and tools employed, and that when innovations arise (often in-house) the organisation struggles to successfully spread their use beyond the originators.

In late 2007, I published a paper ([1]) discussing this problem, which concluded:

The use of policy as a tool for embedding TSL following its successful introduction has proved a double-edged tool in that, whilst effective in embedding what has been achieved, it creates barriers to the sustainability of innovation and tensions which might undermine policy itself. This is being exacerbated by the arrival of new technologies and services, which further confuse and weaken organisational control. Those involved in TSL need to examine closely what methods might be employed to enable innovation to be sustained and to question what strategic and policy approaches are needed to avoid blocking both organisational and cultural change. From  2008 -2012 – amongst a lot of other things – I led the “ENABLE” project, which, backed, by substantial JISC funding, aimed at pulling together all change initiatives across Staffordshire University (and its work with partner colleges) that impact on the curriculum design and development process. In working with the change initiatives, the project had two main focuses: firstly the analysis of all current (and changing) processes around curriculum design and development to produce an Enterprise Architecture model of the “as is” state, which could then be used to plan an incremental change path to a desired “to be” model; and secondly the investigation and recommendation of approaches which allow innovation in the institution to be encouraged, but also managed and sustained. The project worked closely with parallel projects at Manchester Metropolitan, Leeds Metropolitan, and Bolton Universities.

The project produced all sorts of useful and interesting outputs, but in terms of the issues I have discussed here, the paper “The Importance of Governance in Sustaining Innovation” which I published online in 2012, summarises what I see as the main problem – it is the way educational institutions are organised and managed, particularly in terms of the way their use of information is governed, that is acting as the biggest single barrier to innovation and progress in the use of technology to support and enhance teaching and learning.  A telling quote from Peter Weill, a leader in the Enterprise Architecture field, Director of the Center for Information Systems Research at MIT’s Sloan School of Management and co-author of Enterprise Architecture as Strategy, in an interview for CIO magazine links organisational performance with senior management understanding of IT governance and the related issues:

Questioner: What are some of the top pitfalls that plague IT governance?

A last point I would mention – having been a member of the Board of Directors of the IMS Global learning technology standards organisation from February 2008 to October 2015 – is that the issues I have described above relating to the governance of information and how institutions are organized have contributed significantly to the situation where, back in 2003, “interoperability” was seen as a major issue in the context of TEL (in terms of systems used for delivery, management and analytics) and, having attended events in the last 12 months, still is. Mark Stiles, Emeritus Professor of Technology Supported Learning, Staffordshire University, has been involved with the use of technology to support learning for around 30 years, and has led research and development work in strategy, policy, systems development and interoperability, and pedagogy.  Mark was previously Deputy Chair of the JISC Learning and Teaching committee for some years, Chair of the CETIS (formerly JISC-CETIS) Board and a member of the Board of Directors of IMS Global. Mark’s current interest focuses on the tensions between issues of control and sustaining innovation within organisations in the context of TEL. Mark provides advice and consultancy to UK Higher and Further Education Institutions and related organisations and those running projects in the area of Learning Technology.