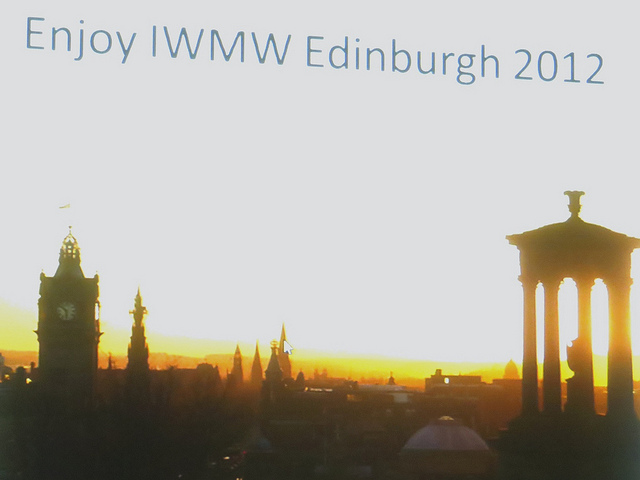 Well, here it is, my inaugural blog post for the IWMW blog. I don’t know how I get myself involved in these things, I really don’t. One minute I’m minding my own business in the IWMW Slack channel [used by the IWMW 2016 advisory group – editor] and the next I’m volunteering to write a blog post. Better say something useful now.

In the grand history of IWMW, I’m a relative newcomer, a mere babe in arms compared to some. My first event was in 2012 in Edinburgh and I’ve attended faithfully every year since. I was, at the time, just a web developer for one of the colleges within the University of Dundee and I had a team of one, me.  Although I had heard about IWMW previously, due to holidays and other commitments, I’d never been able to attend. However 2012 proved to be the gathering of the perfect storm. Budgets were available, conference dates were free and I even had senior academics encouraging me to attend.

So off I went on the short hop from central Fife, across the river Forth to land in Edinburgh, ready to be educated, informed and take home new ideas that would transform our web presence. I remember very little of the first day except that it was a scorcher. For those southern types for whom gorgeous days are the norm during the height of summer, a day in Scotland worthy of sticking in my memory for almost four years must have been a corker.

Whilst nothing appears to have embedded itself in my memory from the first day, my enduring memory of that first conference was the great sense of community coming from both the participants and audience alike. It is the thing that encourages a lonely developer to keep going, knowing that there are others out there who are going through similar experiences and in many ways are sharing the same frustrations.

The following year we headed towards the opposite end of the UK to Bath University and to the news that funding was being pulled for IWMW. I had only been to one conference, and yet I was disappointed. Questions raced around the conference both in the sessions and later on. What would happen, would it continue, who would take it on? The message from the community was clear though. We couldn’t let something like this die without a fight. Those who had gone before us had gone through so much, the battle scars still obvious. We needed this to survive to ensure our own survival.

But then there arose a great man. A man who had led us for so many years but who would stand up and take on the mantle, even in times of great adversity. He would be the one to lift IWMW from what appeared to be ashes. They called him Brian. This bearded wonder, the like of whom appears only once in a generation, would stand in the face of the storm and refuse to be moved. He would pick it up, dust it off, and set it on its feet, ready to meet the changes head on.

Northumbria University was our host in 2014 and the conference took on the subject of “Rebooting the Web”. Not only was the conference changing, but the entire web landscape was shifting underneath us. “Digital” had well and truly arrived and the treasures that it promised set even the most hardened of hearts racing. Ross Ferguson became our hero that year as he very quietly explained the revolution that he was planning for the University of Bath.

Back at Dundee, our own revolution was brewing. A new Director of IT had come in and everything was changing. It was a period of great uncertainty, but one of great promise as well. With the challenge laid down in Northumbria from the likes of Ross Ferguson and Paul Boag, I headed back to Dundee, wondering how I could push the cause of digital in my own institution.

The IWMW events gave me the courage to speak up. To talk to those in the senior positions and to try and lay out in front of them the bounties that could be ours if only we’d embrace a digital first methodology. I have been very lucky to work at the University of Dundee in an environment where those senior to me have been very willing to listen. They listened politely to me in meetings, they kindly read my copious emails and responded encouragingly. They even watched the little videos that I produced to try and get the concepts over to them.

Here in 2016 I have taken up the position of Head of Web Services. Under me I have a team of twelve covering design, development, user experience, content and user support. We’ve reached a crucial point in our history where we are facing a storm ahead. However we’re taking the advice of a 2015 IWMW speaker who talked about the means by which to bring about change: “Have a good crisis, and don’t waste it!”.

We have big challenges ahead of us, huge if I’m to be honest. However having the experience and knowledge of the myriad IWMW speakers and facilitators both past and future is a great encouragement. What I hope for the conference, more than anything else, is that it continues to do what it does best. To bring together a community of people, to share openly and encourage but most of all to inspire us all to greatness in our own spheres of service. Andrew Millar is Head of Web Services at the University of Dundee leading a team of 12 to deliver the institutional website. Currently involved in restructuring teams, developing our ongoing web strategy and changing the culture of how we do web. Would love to speak to anyone interested in delivering sessions on cultural or strategic change or new technical innovations.